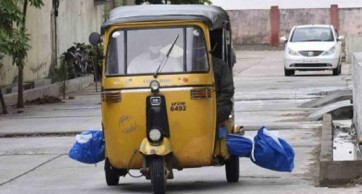 Hyderabad, May 19 (IANS) Auto-rickshaws, cabs and trucks went off the roads in Hyderabad and other parts of Telangana on Thursday in response to a day-long bandh call given by various unions in support of their demands.

Owners and drivers of auto trolleys, DCM vans and private buses are also participating in the 24-hour long bandh, which began at midnight.

The Joint Action Committees (JACs) of owners and drivers of cabs, auto-rickshaw and trucks have called for the protest against the arbitrary hike in taxes and penalties and also to press for their demands.

They demanded that the government immediately withdraw the daily fine of Rs 50 for not renewing fitness certificates.

The unions have also given a call for laying siege to the office of Road Transport Authority (RTA) at Khairatabad. Police have beefed up security around the RTA office as a precautionary measure.

The vehicle owners and drivers say increasing prices of diesel, petrol and gas had already imposed a heavy burden on them and the steep hike in green, life and road taxes and fitness penalties has come as another blow.

The transport authorities had last month revised the taxes and penalties, as per the Motor Vehicles Act 2019.

Leaders of the unions say owners are not taking the vehicles out for the fear of being seized by authorities for not renewing the fitness certificates. They say the certificates could not be renewed during Covid-19 pandemic and now they are not in a position to pay a heavy penalty.

Cabbies are demanding the implementation of the motor vehicle aggregator guidelines 2020. Auto drivers and cabs are also seeking revision of meter fare in view of the hike in fuel prices.

Meanwhile, state-owned Telangana State Road Transport Corporation (TSRTC) is operating special services in view of the strike by cabs and autos. The TSRTC Greater Hyderabad Zone officials said they will operate special buses to meet the demand wherever required.