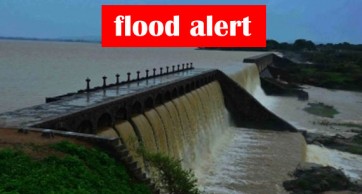 Hyderabad, Sep 12 (IANS) The Telangana government on Monday sounded an alert in the districts on the banks of Godavari river in view of flood threat.

Chief Minister K. Chandrashekhar Rao instructed Chief Secretary Somesh Kumar to alert the Collectors and Superintendents of Police of all the districts of the Godavari catchment area including Kothagudem and Mulugu.

Following heavy rain in the upper riparian region, the flood flow of Godavari is increasing steadily and is crossing 9 lakh cusecs, said the Chief Minister's Office.

The Chief Minister directed the officials to set up a control room in the secretariat immediately and monitor the situation from time to time.

Authorities have opened 35 crest gates of Sri Ram Sagar to release water towards the downstream. The flood discharge at Sri Ram Sagar is 2.06 lakh cusecs.

As many as 85 gates of Yellampalli reservoir have been opened to let out 6.7 lakh cusecs. The flood discharge at Medigadda is 8.2 lakh cusecs.

This the second time in two months that Godavari is witnessing floods. Unprecedented floods in July had cause widespread damage to crops.

Incessant rain of last 3-4 days have wrecked havoc in parts of Telangana. Some towns and villages have submerged due to continuing rains. In some of the districts, villages were cut off as water was overflowing the roads.

Normal life was hit due to heavy downpour in north Telangana districts. The road traffic was badly affected. In Mancherial district, national highway 23 was totally submerged due an overflowing stream, bringing the vehicular traffic to a halt.

Two persons were killed and one injured when a tree fell on a car in Nirmal district.

Allapalli Bhadradri Kothagudem district recorded the highest rainfall of 35.1 cm during 24 hours that ended at 8.30 a.m. ON Sunday.

According to officials, this is the third highest rainfall in 115 years.