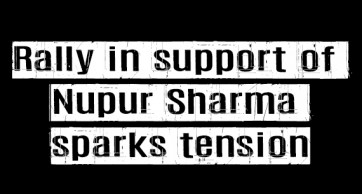 Hyderabad, June 14 (IANS) A rally taken out by some persons in support of suspended BJP leader Nupur Sharma in Bowenpally area in Hyderabad sparked tension, sources said on Tuesday.

The incident occurred in Hasmathpet locality late on Monday night when some persons took out candle light rally to express solidarity with Sharma, who was suspended by the BJP on June 5 after her blasphemous remarks triggered an outrage from Muslim nations.

The participants who carried placards raised slogans in support of the suspended leader. On noticing this, another group raised an objection and raised counter-slogans. Both the groups engaged in confrontation, triggering tension.

Timely intervention by the police averted the situation from turning ugly. Following the incident, police intensified patrolling and deployed additional force in the area to prevent any law and order problem.